It was a rally of solidarity and unity between Christians and Jews who gathered at Lake Eola Park on Sunday afternoon to show support for Israel. Organizers of the Stand with Israel Rally, Idit Lotringer, director of the Israeli-American Council Orlando and Laurie Cardoza-Moore, president of Proclaiming Justice to the Nations, were thrilled with such short notice about the turnout of more than 200 people who peacefully and enthusiastically showed their support for Israel after a crushing 11 days of war with Hamas and now in a ceasefire agreement. Security was provided by approximately 50 Orange County Police officers who congregated in groups around the crowd.

Pastor Roger Diaz of Fellowship Church – whose members yearly go to Kedumin in Samaria to work (not tour), and have maintained support for the Ma’aleh Amos settlement in Judea and Rabbi Eliezer Waldman, co-founder of Kiryat Arba and president of Yeshivat Nir in Kiryat Arba – opened the rally with prayer and words of encouragement. He also asked for a show of hands of who is Jewish and who is Christian in the crowd. There may have been a few more Jewish people, but it was very close.

Rabbi Mendy Bronstein of Chabad of Altamonte Springs followed with prayers for Israel, the reading of Psalms 121, and also encouraged the listeners to do a mitzvah for Israel. 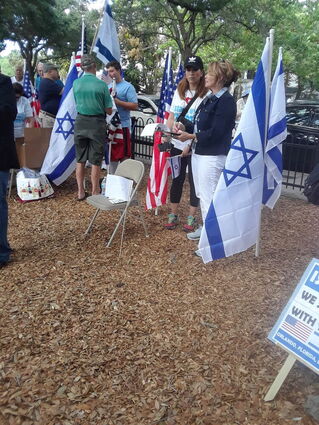 Fine, the only Florida representative who is Jewish, was quite outspoken as he shared that Jews have been targeted for thousands of years, and that Israel is the only country forced to protect the third religious site of another religion, but is kept from worshipping at that site, which is their only Holy site – the Temple Mount. He proudly shared that since he has been in office, Jerusalem was recognized as the eternal capital of Israel; a bill was passed stating that any company that boycotts Israel will be boycotted by the Florida government; the Anti-Semitism Protections Bill passed, which states, in part, that it is antisemitic to hold Israel to a different standard than other countries.

Rabbi Feldman boldly stated that “Hamas is murderous and dangerous. They have called on all Arabs to cut off the heads of Jews! Hamas is the Palestinian version of ISIS.” He continued, “Jews all around the world are under attack. It is time for all of us to say ‘Jewish Lives Matter!’,” to which the crowd began chanting “Jewish Lives Matter!”

Drawing the rally to a close, Lotringer spoke. “Most important to me,” she shared, “is unity. We are all together against antisemitism. None of us need to be scared to pray, speak Hebrew, wear a kippah. We are one – echad.”

Letter to the editor: Christians coaxed to worship demagogues – TribLIVE

Weather: Severe Thunderstorm Watch for much of Maryland

You Matter We Care conference series kicking off June 12 | News