It’s obviously too early to make sweeping generalizations about this election, but the New York Times has published preliminary exit polling data. This particular bit really sticks out: 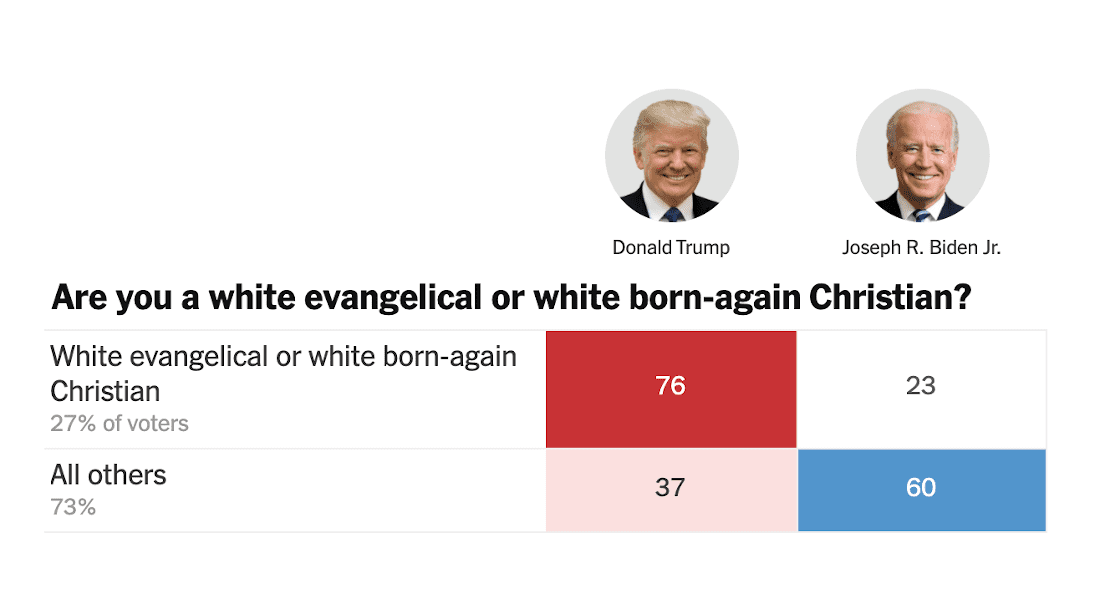 Roughly 76% of white evangelical Christians supported Donald Trump. That’s slightly lower than the roughly 81% who voted for him in 2016, but even if that number changes around a bit, it’s still overwhelming. This was predicted for a while, but still. Those Christians decided that Trump’s bigotry, racism, corruption, and lies were still worth supporting because they don’t give a shit about any of that if they get lip service and judges.

I suppose if there’s any silver lining here, it’s that Trump may in fact lose this election. If that’s true, then maybe those Christians, having lost their Lord and Savior, can take some time to reflect on why their stated values have deviated so far from their actions. But they won’t.

One thing that’s become abundantly clear over the past few years is that all the criticism of conservative Christians that atheists and liberals have been leveling for years were exactly right. They are hypocrites. They are cruel. They don’t care about racism. They’re not bothered by injustice. And they will never change.

They are nothing like the God they claim to worship. And they would want nothing to do with Jesus if He showed up today.

If Trump loses this election, we must remember all this. Never ever let them backpedal from what they’ve done — because it won’t be long before their leaders start their apology tours. We know what they really stand for, and they deserve to pay a social and cultural price for it.