Raleigh, N.C. — St. David’s overcame a slow start defensively to beat Faith Christian (Rocky Mount) in a decisive manner, 62-40. It was a top 13 matchup according to the HighSchoolOT NCISAA football rankings, with St. David’s ranked No. 9 and the Patriots ranked No. 13.

It did not take long for the Warriors to score. Just 45 seconds into the game, St. David’s back Cole Deihl dashed into the end zone for a 51-yard touchdown.

Faith Christian quarterback Chandler Cockrell answered with a 26-yard keeper to tie the game at 8 with 8:30 left in the first quarter. The Patriots recovered the ensuing onside kick attempt.

Faith Christian was missing standout rusher Shaikey Hardy, who is now out for the season with a torn rotator cuff. Without Hardy, Faith Christian running back DeAnthony Joyner looked good in the lead role. Joyner scored on a 45-yard sprint soon after the onside kick. Faith took an early 16-8 lead over St. David’s. 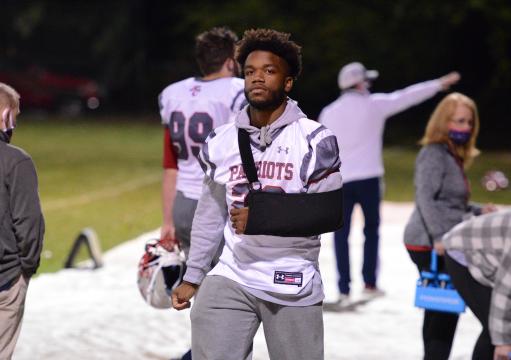 Raleigh’s Warriors responded with a beautiful 39-yard touchdown pass from senior quarterback Paxton Williams to senior Meik Goode. The game was knotted at 16 with 7:44 left in the opening quarter.

The offenses for both teams came to a sudden halt fo the remainder of the first quarter. The score remained 16-16 going into the second quarter.

DeAnthony Joyner scored on a 7-yard rush to stop the scoring drought with 9:50 to go until halftime. The two point conversion was not successful, so Faith Christian led 22-16.

An onside kick attempt was recovered by St. David’s. The Warriors scored not long after that on a Ford Everett 13-yard run up the middle. Everett also scored on the two-point try, giving St. David’s a 24-22 lead.

St. David’s recovered the onside kick attempt, lost possession with a turnover on downs. Faith Christian also failed to pick up a first down on the ensuing possession.

Everett scored on a 37-yard run on the next play following the change of possession. Deihl scored on the conversion attempt. St. David’s led 32-22 with 3:37 left in the first half.

St. David’s got the ball back thanks to a juggling interception by Heyward George off a deflection by a Faith Christian receiver.

Williams hit Goode on a 45-yard bomb on the very next play to give St. David’s a 40-22 lead, following the successful two-point conversion.

The contest was put out of reach midway through the third after a 74-yard run by Cole Deihl set up a 1-yard touchdown by Deihl. Willimas hit Everett on the two-point try to give St. David’s a commanding 48-22 lead with 6:40 left in the third quarter.

That advantage lasted into the fourth quarter.

In the fourth quarter, Faith Christian outscored St. David’s 18-14 but it wasn’t enough.

LETTER TO THE EDITOR: Supporting John Galloway for school board | Education

LETTER TO THE EDITOR: Supporting John Galloway for school board | Education

What to Do When You Married a Fool