A local church’s property is now better protected thanks to the efforts of 18-year-old Stinson Hill, a member of Columbiana Boy Scout Troop 560, who on Oct. 8 attained the ranking of Eagle Scout. 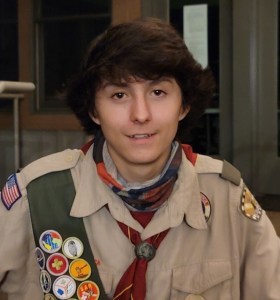 For his Eagle Scout project, Hill, a student at Shelby County High School, helped install a sign and a barrier fence outside Florence Baptist Church, located on Shelby County 49 in the Fourmile community outside Columbiana. The barrier fence is intended to protect the church building, which had sustained damage from rocks slung by vehicles and ATVs driving onto the church’s property and doing donuts.

“He’s out in the community a good bit, and he saw the property damage they were doing up there,” said Troop 560 Scoutmaster Ernest Poe. “I went to school with his Dad, so I’ve known him since he was probably 12 or 13. I watched Stinson grow to be a very hard working young man.”

The small church was established in 1865, and its owners are working to make repairs in hope of having the site recognized with a historical marker.

The project was the latest of several efforts in Hill’s path to becoming an Eagle Scout. During his time as a Scout, he has participated in numerous camping, hiking and whitewater trips. He also worked with the troop to complete several service projects. Now, after completing all requirements and earning 31 merit badges, he has met the goal to earn the highest rank in scouting.

Stinson is the son of Jerry and Jessica Hill and has one younger brother, Ethan.

What Christians Should Remember After the 2020 Election

What Christians Should Remember After the 2020 Election