TAIPEI CONFERENCE:
A Presbyterian pastor and Wuer Kaixi were among the speakers at a forum held by Taiwan Friends of Tibet and the Taiwan East Turkestan Association

Representatives of three of the world’s major religions and others attended a conference in Taipei yesterday to denounce religious persecution in China.

The event was organized by Taiwan Friends of Tibet and the Taiwan East Turkestan Association, and was attended by representatives of Christian churches, Tibetan Buddhists and Muslims, as well as followers of Falun Gong.

Attendees decried the Chinese Communist Party’s (CCP) rule as being directly opposed to religious faith and said that the opportunity to “take down the evil CCP has arrived.” 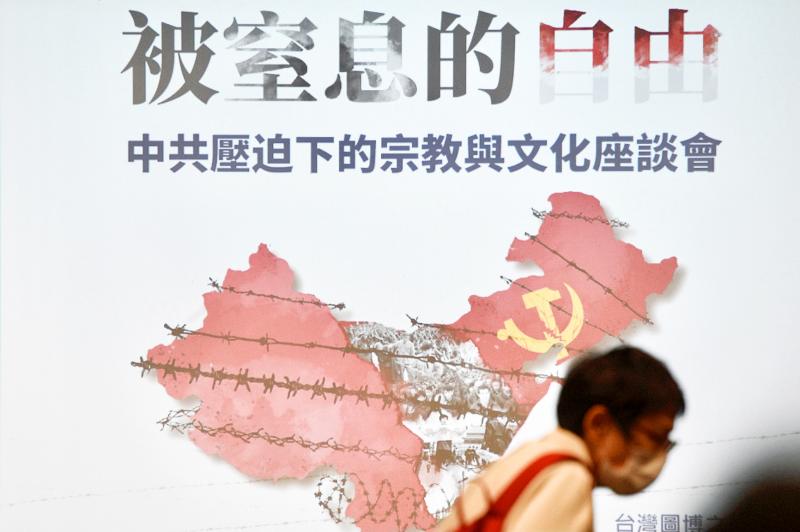 The party has been attacking Christian groups ever since it took power, but has now turned monstrous, said Pastor Huang Chun-sheng (黃春生) of the Che-lam Presbyterian Church (濟南教會), which is next to the Legislative Yuan in Taipei.

It not only indiscriminately imprisons and kills Christians, expels missionaries, destroys Bibles and cracks down on churches, but even edits Christian scriptures and vilifies Jesus to glorify itself, Huang said.

Beijing used to permit churches that adhered to the so-called “three-self doctrine,” but its move in 2018 to place religious affairs under the party’s United Front Work Department clearly showed the world that the party believes that it supersedes all religions, he said.

“Even today, there are still many people who hold out mistaken hope for the CCP, leaving no room between them and evil,” Huang said. “They need to wake up.”

The CCP is afraid of religion because its ideological pull is stronger than the party’s, said Taiwan Association for Democracy Advancement in China chairman Wuer Kaixi, an Uighur who was a prominent student leader during the Tiananmen Square protests in Beijing in 1989.

At its core, the CCP is a criminal organization that after stealing the country used its position to plunder China’s resources, and has fanatically persecuted anyone who stands in its way, he said.

In predominately the Muslim Xinjiang region, having a beard, wearing a veil or not eating pork is now considered extremist behavior, he said, adding that Taiwan must see this madness for what it is.

Tibetan Buddhists have long been a target of the CCP because their religious beliefs are tied to Tibetans’ national and cultural identity, hindering the CCP’s policy of wiping out minority ethnicities, said Dawa Tsering, chairman of the Tibet Religious Foundation of His Holiness the Dalai Lama.

The party’s actions follow the UN’s definition of ethnic cleansing to the letter, and Tibetans, Uighurs and Mongolians are fighting for their very existence, he said.

If the international community continues to tolerate Beijing’s ethnic cleansing policies, it would eventually suffer the consequences, he added.

Even though the forced harvesting of human organs is “the biggest human-made disaster of the 21st century,” it still continues today because of its financial benefits, she said.

According to a 2007 report by the Chinese newspaper Southern Weekly, the Oriental Organ Transplant Center in Tianjin, China, earned 100 million yuan (US$14.95 million at the current exchange rate) from liver transplants alone, Chu said.

However, there are forces of good “willing to unite against evil,” she said, adding that now is the time to topple the CCP’s regime.

Chu said she hopes more people would “stand on the right side of history” and join together to fight the CCP’s “evil dictatorship.”

Comments will be moderated. Keep comments relevant to the article. Remarks containing abusive and obscene language, personal attacks of any kind or promotion will be removed and the user banned. Final decision will be at the discretion of the Taipei Times.